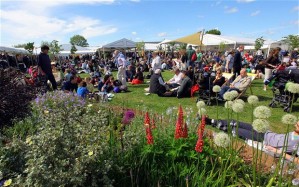 A quick poem in reply to a challenge set by Hay Festival Car Park Crew!!

Hay Festival Car Park – AKA The Field of Dreams.

Upon the Field of Dreams they larked
Puzzling cars to get them parked
Much to the joy of those who came
To quench their thirst on bookish game.

The rain it poured, the sun it hid.
Knee deep in mud they squelched and slid,
Till all was packed in ordered rows
As wellies leaked on freezing toes

The Night Watch in his glowing garb
(A wallet tighter than a barb)
Kept safe the field under the stars
While others ‘researched’ Hay-Town bars!

So each morning, ever readied
To aid those who felt unsteadied
They parked the cars with speedy skill
Or met new authors, such a thrill.

Some Customers, when parking done
Took selfies for our Twitter fun
And bounded off towards the tents
Some bounded quicker for the gents.

Then readings done, the volumes bought
Our brains vaporized by thought
We trudged back to those cheerful peeps
Who watched our vans and cars and jeeps.

The sun appeared, then went back in,
We took it all upon the chin
Because those guys who found us space
Made Hay-on-Wye an awesome place.