WORDS OF THE WEEK – The School Nativity by Jo Jones

Posted on December 17, 2014 by thehaywriters 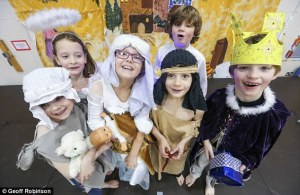 Children dressed up from Little Downham School by Geoff Robinson.

Miss James, form two, was casting the Nativity play.  It was early November yet she was already using the threat of “Father Christmas only brings toys for children who behave themselves” as a ploy to keep her disruptive pupils under control during rehearsals..

Bert, who was one half of the twins, had been cast as the front end of the donkey.  She had assured him that it was a VERY IMPORTANT PART.  It even had its own carol, Little Donkey which would be sung by form one.

Bert was not impressed.

Archie, his twin brother had been cast as shepherd number five with a small speaking part. This delighted his mother ( who had  also been using the threat about what Father Christmas may or may not bring Bert if he did not behave at home as well as school.)

Bert was no fool. He had observed, despite his young age, that FC brought him exactly the same things as Archie whether he had been a well behaved boy or not; so why worry.

With a bit of bribery Bert had managed to persuade the back end of the donkey to join him in his plan to expand their role into a more rounded, entertaining one. Just standing motionless while various shepherds, wise men et al plodded through the stable got very tedious after a few rehearsals. They had secretly practiced some fancy dance steps and a silly walk to liven the show up a bit. To get the full impact they were saving all this for the actual performance at the school carol service in the local church.

There wasn’t an empty seat in the place; form one, dressed in pyjamas or nighties and carrying their teddy bears to give it that “AH” factor were sitting on

the front row, thus having a wonderful view of the Nativity.

The donkey had carried a nervous Mary to the inn without mishap, baby Jesus had been born and it was now time for visitors. When class one began singing Away in a manger they began some tentative, slow dance steps in perfect sync.  A ripple of titters could be heard from the front rows.

Emboldened by the giggles Bert and his mate decided to do their funny walk and shift their position in the crowded stable to the opposite side. By now the giggles had swelled to helpless laughter. Unfortunately Bert, carried away by the response from the audience, missed his footing on the chancel steps, thus causing little donkey to land in a heap at the bottom.

At this point Mrs Davies the headmistress and Miss James both sidled onto the stage and escorted the donkey into the vestry.

Form one’s rendition of  away in a manger had fizzled out by verse three causing a lull in the proceedings. It gave Archie and Bert’s father time to resume his composure; their mother looked as though she had been chewing a wasp, she was furious (more with their father for laughing than with Bert.)

Bert was still hopeful that he would receive his full quota of presents from Father Christmas; after all, his father had winked at him while telling him off.