The tiny twin-propeller aircraft hums low over the desert. All is empty, devoid of any object to focus the eye, yet not featureless. Swells and troughs of sand paint a vast abstract canvas where sharp ridges of dune divide hues of beige. The engine buzz lowers in tone. In the middle of the desert, a rectangle of flattened sand, the size of a football pitch. No fence, no building except a bus shelter of corrugated iron on the roof of which, in bold white letters, are the words, ‘FAHUD INTERNATIONAL AIRPORT’.

The aircraft-bird swoops, briefly touches the ground, deposits a single egg that is me, and with insouciant regard for my safety, flies away. No person, no vehicle, not even detritus, nothing but sand and an empty tin shack. I up-end my suitcase and sit. I hope someone knows where I am. Yes, I am seeking adventure, but I didn’t expect it to arrive so quickly. 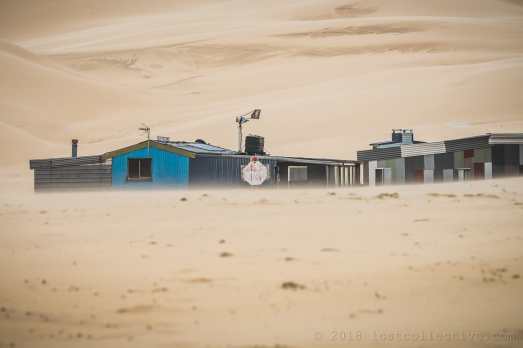 At least I’m not required to make a decision: there are no options other than wait. I have no water.

A long two hours pass. A Land Rover arrives. The party chief apologises for being late. ‘Welcome to Oman.’

My accommodation at camp could be mistaken for an aircraft egg: a silver pod on wheels containing little more than a single bed. Five in the morning, our Persian cook, Dawood, handsome as Omar Sharif, knocks and enters to place a silver tray at my bedside – cup, jug of milk and pot of tea.

In the merest promise of dawn, I’m in the Land Rover with my Arab co-driver Saleem. I’m 23, he can’t be any older. There are no roads. The land – stony, black – undulates, giving every impression that we’re skimming across a rolling sea. Small shrivelled shrubs, dead from dehydration, have one brief moment of glory. They’re adorned with tiny globes of water from night-time dew and, as the sun rises, its beams set them alight, the dull bush suddenly transformed into a flowering beauty, a myriad of fairy-lights glistening red, blue, yellow and green.

Abruptly, we arrive at our destination. In a fit of housekeeping, an ancient giant of the desert has swept Arabian sands into neat rows in a corner of Oman. This is Wahiba. It is totally uninhabited, uninhabitable. We drive two hours along a valley floor between sloping drifts of sand to find the dunes either side converge, blocking the route forward. Nothing for it but to cross into the parallel valley. Wheels spinning, we reverse up the right-hand slope, then accelerate down, across the valley floor, gaining just the right momentum to take us gently over the ridge of the left-hand dune. Too slow and we’d have to repeat the procedure; too fast and we’d fly over the top, out of control in a dangerous rotating slither. The third possible predicament is to settle horizontally across the ridge unable to proceed forwards or backwards. 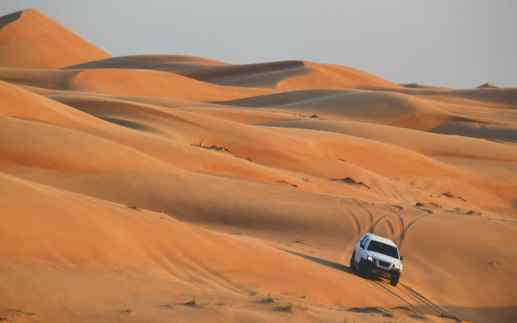 Another hour along the new valley and, at last, we can begin our work, which is, in more ways than one, a treasure hunt. Saleem and I compete to be first to spot bunting. The surveyors have created a lattice of kilometre squares marking each corner with red bunting. Over there, we see the first. I lift the hugely expensive, heavy gravimeter from its protective case and set it level on the ground.

The gravimeter is sensitive to minute change in gravity, responsive even to the movement of Sun and Moon. A subterranean pocket of oil betrays its presence by an otherwise unexplained depression in gravimeter reading. There, our client company Shell might decide, is a likely spot to bore a well. Shell has declared that a ground-based survey of the Wahiba Sands is impossible. We, the first white people to enter this region, are here to prove them wrong.

Two hours of chasing red bunting and it’s time to head back. Saleem invites me to his house in the oasis of Al Mintrub where I discover that he is married, although his wife remains hidden throughout my visit. He proudly shows off his rifle and cartridge belt and, around his waist, a dagger beautifully embossed in ivory and silver. We share coffee and he offers me fruit from his garden: dates, banana, lemme (much like a lemon) and fig.

Eight Englishmen make up our crew. Party chief, Laurence, is 26. He can be excused for being inefficient but not for his sour expression and failure to encourage. The real chief of the party is Charlie. Supremely good looking, he appears much younger than his 42 years. He is a born raconteur, spinning one anecdote after another, tripping us into howls of laughter with his comic expressions and vicious mimicry. His stories range from the misfortunes of past survey crews, his risqué adventures in any number of brothels, and the misdeeds of his (ex) wives. He disparages any opinion not his own, with especial venom reserved for ‘theoretical’ education. Eschewing female company, he is bitter and cynical, the eternal wanderer in perpetual self-exile.

It is Id and a welcome day off. What does one do on a holiday? Go to the races of course. We dress up in white shirts and long trousers and drive to Al Mintrub. It’s a town out of a cowboy film – long, wide, dirt road bound on either side with simple houses. Men throng the sidewalks. They’re clothed in their festive white arbaiga with heads wrapped in orange Kufeia. Young boys, in eye-catching cloaks of green and yellow, dash about unrestrained. The women, packing the rooftops, have a grandstand view. A young girl, accompanied by her mother, emerges from a doorway. Her face is waxed in yellow grease and she’s adorned with silver bells and chains and amulets to keep the evil spirits at bay. 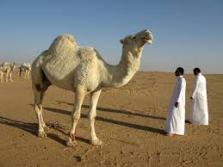 We walk down the centre of the street attracting as much undisguised curiosity as if we were the Magnificent Seven. We are met, mid street, by the white-bearded sheik, who invites us to sit with him on his carpets. From here, we have a fine view of the camels, newly washed and brushed.

Two camels are led forward. The jockeys pull vigorously on the rope about each camel’s neck. One is brought to its knees, but as the other descends, the first is up and away. At last both camels, roaring disapproval, are lying on the sand. The jockeys, slowly, vigilantly, holding tight to the noose, creep up behind. With a shout, they both leap onto the rising camels and fly down the street in a confusion of sand, flaying hooves and blood-curdling screams. Two more camels are brought forward. It is an Alice in Wonderland race: there are no winners and no prizes and it’s only brought to a sudden close when the market is opened and everybody rushes off to buy the best goat.

Three months work and we’re done – Wahiba surveyed, the crew disbanded. Holes are drilled, straws inserted whereby energy-thirsty humanity may suck. Omanis (some) grow fabulously wealthy. Saleem’s wife bears children. And for me – I will not be a Charlie. I head back to England for music and mixed company. A mere twenty years later, I add my voice to those demanding we cork the very wells of oil I helped discover, and I smile at a travel company blurb offering a night in a lodge on the edge of the Wahiba Sands – ‘an adventure you’ll never forget’.